The Ships Mate. A handsome man with the blackest eyebrows. Olive skin, a sea heritage and five ladies he loved. A father and a husband. He was a brave man.

As his twenty eight year old body was ripped apart, his Young Wife sat at home nursing their baby. The Youngest daughter of four.

Did The Captain think it best they pull in the mine protecting the fishing fleets that toiled beside them…. Or was it just a deadly catch.The Ships Mate paid with his life. As the mines lethal contents blew him out of the water his family’s lives were changed forever.

The Ship Mates Youngest Daughter didn’t recall him, but held the scent of him deep within her brain. Six months lying against his chest made sure of that. She had his eyebrows and a hereditary something nobody would be able to tell her about. By the time it properly showed itself her tired, bereft Mother ( once a Young Wife) would have given up.

The Seaman’s Mission could put food on the table but they couldn’t explain why The Shipmates Youngest Daughter was different, why she raged and hit out and ran away. Not like the others they were good girls. Not her. Mental. Not all there. Subnormal.

The Ship Mates Youngest Daughter needed help for the hereditary thing that nobody knew…..but she got hell. Would The Ships Mate have murdered those that abused his Daughter in the name of care, if only he were there.The Youngest Daughter dreamed that he would and the rage grew.

The Youngest Daughter was thirty, adrift and drunk when the Stubborn Old Soldier saw the good through her defiant dark eyes and fell in love.

The Youngest Daughter became The Mother… Too many, too quick. No time to mourn the one in between that died as he came out of her early and onto the hallway carpet.

The Mother raged and cried and drank and laughed at things that weren’t funny. Like her fist in his face.

Stubborn Old Soldier was at a loss. His first wife, god rest her soul, was not crazy like this. Nor were his grown up children…had no trouble with them.

He had heard The Mothers vile tales of care and it scared the life out of him. More than the fear he felt in war. But his three young children were suffering. Wide eyed and shaking in the midst of loud and constant chaos. Their Granny (once The Young Wife) tried. Their Aunty (once the Eldest Daughter) tried. The Stubborn Old Soldier (once a War Hero ) tried.

But this war, a war in their collective minds, was lost and the challenge too big. The household crumbled under the violence and shame.

The only one The Mother could visit was the dead one. So she did. She howled to him of what could have been if only The Ships Mate were there.

The Stubborn Old Soldier and The Mother stayed together. He cared for her. He was dutiful. He saved The State a fortune. On a bad day he wished he had help but he wasn’t called Stubborn for nothing. The Mother felt her sentence daily, like a noose around her neck. Some nights she was sure Her Children visited her in her dreams but as the years passed their faces became mist. One unexpected day when they met Their Children, The Mother and The Father told them their story.

The Mother apologised but It didn’t make the pain go away. It sat in Their Children’s minds alongside the history written by The Strangers, that sat on their files.

Their Family History. Their Story, Their Reasons, It all knotted together to become an invisible anchor. Left by the The Ships Mate who couldn’t be there.

In Memory Of My Grandad. 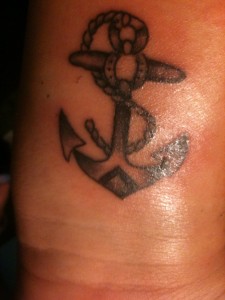